Hovedskovgaard was originally a Royal Estate under the Danish crown, owned by the Danish King.
The oldest documents we have found about the farm  claim that in 1596 Hovedskovgaard was   managed by judge Peder Juul, but the farm is probably much older.
Among the judges´duties  he had to settle local disagreements, but also to look after the King´s interests on Møn.

In 1668 the King gave the farm to the war hero Jacob Dannefærd.
He received Hovedskovgaard as a  Reward for  having captured a Swedish warship with Danish prisoners of war, and sailed the ship to Copenhagen.

In  1736 the farm was bought by Jørgen Hansen. He was the first representative for a family who owned Hodvedskovgaard for more than 250 years.  In 1987 the last descendant of Jørgen Hansen gave up the farm, hardly pressed by the governments potato-cure that during the 80ies made many farmers give up their farms-.

Thanks to friendly help from  the son of the last    desendant and owner of  the farm,   we have required much material about Hovedskovgaard, that we have printed out in a leaflet.

This leaflet is given for free to all our guests. 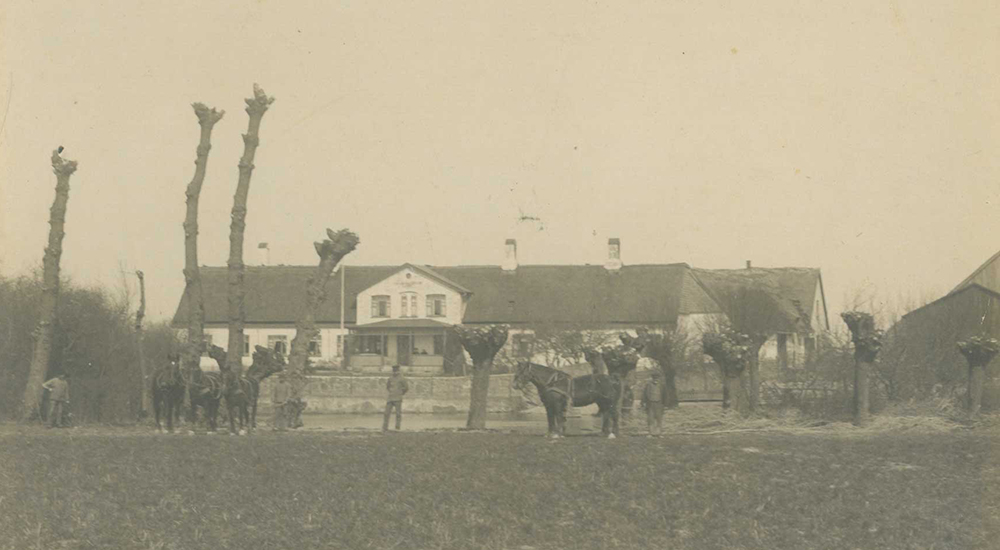 The main house was renovated in 1906-but is much older.
In the middle of the picture we see Hans Jørgen Jensen who owned HOVEDSKOVGAARD from 1883 – 1932.
With his 49 years on the farm, he is the farmer who has spent most years on Hovedskovgaard.

The present
Today there is no farming on Hovedskovgaard. The farmland is sold, and  the main house is filled by the sound of happy holiday visitors.
For the last 50 years there has been summerguests/B&B in HOVEDSKOVGAARD, AND WE ARE PROUD AND HAPPY TO CARRY  ON THAT TRADITION.